I wasn’t a huge fan of The Last Jedi. I explain as much in my piece Reflections on The Last Jedi (which you can read for yourself). But while I did not find it as groundbreaking as other Star Wars fans, neither did I fully despise the film. I could appreciate the film at points, acknowledging that the movie presented clever and unique ideas, along with some interesting new characters.

Two of those characters were the Tico sisters: Paige and Rose. While Paige Tico only appears at the beginning of The Last Jedi as a ball gunner in a Resistance bomber, her small role is massive in that she sacrifices herself to destroy a First Order dreadnaught which threatens the Resistance fleet. Grasping the crescent necklace around her neck, Paige Tico dies in order for others, including her sister Rose, to live.

Rose, in turn, makes her appearance after Paige’s death, when Finn comes across  her as he attempts to leave the Resistance fleet. Rose, grasping her own crescent necklage, sits in tears. Introduced by this obvious connection to her sister – and subsequently mentioning her sister to Finn – Rose ends up going on an adventure with Finn and BB-8 to the planet Canto Bight. In turn, Rose, Finn and BB-8, accompanied by the slicer DJ, eventually make their way to the First Order fleet chasing the Resistance fleet in the hopes of disabling the First Order’s hyperspace device. Captured while aboard the First Order Mega-Star Destroyer thanks to the betrayal of DJ, Tico and company end up stealing an enemy shuttle in order to make it to the new Resistance base on the nearby planet Crait.

Once on Crait, Rose participates in a desperate ground battle with her allies, piloting a ski speeder against overwhelming First Order numbers in the hopes of destroying the enemy battering ram cannon. Finn, whom Rose has grown close to by this point in the film thanks to the adventure to Canto Bight and the First Order Star Destroyer, chooses to sacrifice himself when all hope seems lost, piloting his ski speeder towards the massive cannon. But at the last minute, Tico crashes into Finn, pushing him off course. In turn, Finn will run to Rose, pulling her from the wreckage but first questioning why she crashed into him. Rose, bleeding and shaken, will explain to Finn that  “…we’re gonna win, not fighting what we hate, but saving what we love.” Rose then kisses Finn before she passes out from her wounds. Dragged back to the Resistance base by Finn, the unconscious Rose will survive the Battle of Crait with the remaining Resistance fighters aboard the Millennium Falcon. 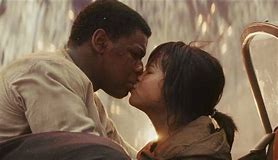 When I saw The Last Jedi, I thought Rose Tico was an interesting and well-developed character even though I did not entirely care for the adventure she takes to Canto Bight or the First Order Star Destroyer. What drew me to Rose was her hopeful spirit, her resilience, her internal confidence, and her desire to help others. She is introduced in The Last Jedi as a character who is overwhelmed by the loss of her sister but also inspired by her sister’s heroic sacrifice. When she meets Finn, she is equally overwhelmed, amazed she is speaking with the First Order stormtrooper-turned-Resistance hero who also inspires her to keep fighting the good fight. Filled with deep admiration for the heroes in the Resistance, Rose Tico is the embodiment of the heart and fighting spirit which keeps the Resistance going, a perfect example of the “spark that’ll light the fire that’ll burn the First Order down.”

But this brief overview of Rose and her role in The Last Jedi is a means to an end, a small set-up to arrive at the larger point of reflection I wish to discuss: the way Rose Tico was (mis)used in The Rise of Skywalker.

The (Mis)Use of Rose Tico

When I went into my first viewing of The Rise of Skywalker, the final installment of Disney’s Star Wars sequel trilogy, I did so with the presumption that Rose Tico would be an important player in the events which would transpire. My presumption, unfortunately, was wrong.

Violet Kim, a journalist for Slate, recently published a short piece about Rose Tico’s notable absence from The Rise of Skywalker. In the piece, which you can read HERE, Kim notes that Rose appears on-screen in The Rise of Skywalker, a movie with a run-time of 2 hours and 22 minutes, for only 1 minute and 16 seconds.  As a point of contrast, Kim goes on to note that in The Last Jedi, which has a run-time of 2 hours and 32 minutes, Rose is on-screen for 10 minutes and 53 seconds.

Even without the breakdown into minutes and seconds – which is, admittedly, pretty eye-popping – it is obvious that Rose’s role in the film is lacking. And I am not going to lie, this (mis)use of Rose Tico left me feeling equally perplexed and upset. In part, I felt this way because after The Last Jedi, actress Kelly Marie Tran, who plays Rose, was assailed online with racist and sexual harassment which in turn led Tran to delete her social media presence. In a sense, the lack of screentime for Rose in The Rise of Skywalker makes it seem as though these online trolls actually got their way, that they were successful in getting a principal character, a woman of color, sidelined in the film. Because of the nasty vitriol which Kelly Marie Tran was subjected to following The Last Jedi, it was even more critical and important for J.J. Abrams and Chris Terrio, co-writers of The Rise of Skywalker, to find ways to raise Tico’s profile in the movie. That this did not happen is not only unfortunate, but it makes one wonder if Abrams and Terrio took Tran’s harassment seriously or considered the possibility that if Rose was not featured more prominently in the film that her absence would embolden the trolls who attacked Tran in the first place.

In their defense, Terrio did come out and explain that Rose was intended to be more prominent in the film. As he explains in an interview with Clarence Moye of Awards Daily, he and Abrams,

“…wanted Rose to be the anchor at the rebel base who was with Leia. We thought we couldn’t leave Leia at the base without any of the principals whom we love, so Leia and Rose were working together. As the process evolved, a few scenes we’d written with Rose and Leia turned out not to meet the standard of photorealism that we’d hoped for. Those scenes unfortunately fell out of the film.”

That Rose was to be featured more in the film, albeit before the editing process took over, is certainly positive. And that she was to be the principal character interacting with Leia is notable even if a number of those scenes were cut from the film. But while I can grant this point to Terrio and Abrams, applauding them for wanting Rose to work closely with Leia, I can simultaneously admit that I find Terrio’s response vague and unconvincing . It is all well-and-good to say that he and Abrams intended for Rose to be in the film more than she is, working alongside Leia, but the fact remains that she is barely in the film (even though Tran herself has noted that she filmed other scenes for the movie). And as a result, her story feels truncated, abruptly cut-off in the wake of The Last Jedi without any sense of finality.

This is all the more disappointing when we consider that the signature moment for Rose in The Last Jedi, the moment she saves Finn from his hatred for the First Order and then kisses him, is entirely ignored in The Rise of Skywalker. Given the adventure they go on in The Last Jedi, Rose obviously started having strong feelings for the former Stormtrooper. Whether Finn felt the same way is left unanswered at the end of The Last Jedi, but The Rise of Skywalker is uninterested in exploring this possibility, or even addressing it. Instead, The Rise of Skywalker seems content to ignore Rose’s kiss and her feelings altogether, instead focusing more on Finn’s connection with Rey, and his relationship with Jannah (another former Stormtrooper who is introduced half-way through the movie). It is as if The Rise of Skywalker is engaged in the narrative “ghosting” of Rose, with Finn purposefully ignoring her because he has other things to do and people (Rey, Poe, C-3PO, Chewbacca, BB-8,and the new droid D-O) to be with.

Rose Tico during The Battle of Exegol, one of the few times we actually see her in the movie.
Photo Credit – Star Wars Episode IX: The Rise of Skywalker

Again, in fairness, this is not to say Rose is not given the chance to join Finn and the others on their galactic scavenger hunt. When she is asked to come along, Rose responds with a narratively contrived reason she needs to stay at the Resistance base: because the General, Rose explains, needs her to analyze the specs of the old, Imperial-class Star Destroyers. With the intention of making Rose the principal with Leia, this ensures that we are all filled-in on why Rose is hanging back. Sadly, with her scenes with Leia being edited out of the film, her need to analyze Star Destroyers instead feels like an excuse to remove her from the main plot of the film, sidelining her so the real heroes can hang out on the Millennium Falcon and save the galaxy.

But the thing is, as I watched The Rise of Skywalker and went on the galactic adventure with the films principal heroes – Rey, Finn, and Poe – I found myself missing Rose even more. I sat and wished she was part of the team, having the chance not only to have a heart-to-heart with Finn during their travels, but also the opportunity to get to know Rey, laugh with Poe, play (and even beat!) Chewbacca at dejarik, work side-by-side with BB-8 and C-3PO, and show kindness to the skittish D-O. Moreover, I found myself wishing Rose Tico was there so she could continue to be “the spark” of Resistance she so fully embodied in The Last Jedi, her heart and fighting spirit, and the crescent necklace around her neck, used as a constant reminder to the heroes (and viewers) that winning would be accomplished  “not fighting what we hate, but saving what we love.”

Bad motivator.
3PO suggests R2.
“What about that one?”

As he cleans R2,
Luke stumbles on a message:
“You’re my only hope.”

“I wish I’d known him.”
Star pilot. Warrior. Friend.
Tales of a Father.

Stopped by Stormtroopers.
“Not the droids you’re looking for.”
A Jedi mind-trick.

Crossing the threshold.
The Mos Eisley Cantina.
A hero’s journey.

Baba. Evazan.
They don’t like Luke very much.
Old Ben saves the day.

With the blast-shield down
Luke is blinded by his doubts
but takes his first steps.

“I’m Luke Skywalker.”
The hero to the rescue!
Leia is just chill.

Chased by Stormtroopers,
a hero swings a Princess
across a chasm.

Haiku Addendum:
Princess Leia could have done
all the heroics.

“Got him, I got him!”
“Great kid, don’t get cocky,” the
smuggler declares.

Pleading with Solo,
Luke learns some are driven by
self-preservation.

“Red Five Standing By.”
He wanted more out of life.
Well, he got his wish…

Biggs dead. Wedge knocked out.
Luke is pursued by Vader,
his father’s killer.

“Use the Force…Let go.”
From the beyond, Old Ben speaks.
Faith in something Great.

The Death Star destroyed.
Luke and his friends celebrate.
The Force is with him.

Good news! This post is Part 1 of 3 of a special three-week version of Haikuesday exploring Luke Skywalker in the Original Star Wars Trilogy. Be on the lookout next Tuesday for haiku about Luke in The Empire Strikes Back!

Check Out Other Haikuesday 2.0 Posts Below: