I recently picked up a copy of Stormtroopers: Beyond the Armor and, I have to say, it was a serendipitous find. While the encyclopedic book by Ryder Windham and Adam Bray had been on my radar for a while, it was not a purchase I was planning on making any time soon. That is until I stumbled upon a copy for a reduced price on recent shopping trip. Immediately scooping it up, I dove into the book the night I bought it and found myself incapable of putting it down. From the Foreword, written by Star Wars actor John Boyega who portrays First Order Stormtrooper FN-2187 (Finn), to the final pages which detail the popular fan organization known as the 501st Legion, Stormtroopers: Beyond the Armor is a fascinating read that explores the history and cultural relevance of the iconic white-armored Imperial soldiers.

For one who is interested in the behind-the-scenes aspects of Star Wars, especially the endless creative decisions that have gone into the universe, this book will definitely satisfy. Beginning in Chapter One (“Creating an Army”), Windham and Bray offer an in-depth understanding of the vision George Lucas had for stormtroopers and how that vision blossomed into reality on the big screen. Laying out explanations and examples of the early stormtrooper designs created by artist Ralph McQuarrie, and describing the aesthetic choices made by the production and art departments working on the film, the authors provide a rich picture of the development of stormtroopers for A New Hope. In subsequent chapters, Windham and Bray expand on these creative choices by examining how the original design of the stormtroopers would be altered time and again, with new trooper variants being incorporated into the ever growing Star Wars galaxy.

In regards to these variants, as a big fan of the Snowtrooper – check out my piece Trooping Through the Snow – I particularly enjoyed learning about how the specialized troops in cold weather gear were created for The Empire Strikes Back. As Windham and Bray mention in this section, McQuarrie’s original design for the snowtrooper officers – which were conceptualized as super commandos from the planet Mandalore – would ultimately be used by Lucas as the armor schematic for Boba Fett. As well, the all-white super commando design would be used in the Star Wars Rebels animated show, debuting in the aptly named episode “Imperial Super Commandos.” As well, I also found the information detailing Death Troopers from the film standalone film Rogue One to be  fascinating. The design of the Death Trooper, the authors note, goes back to the original McQuarrie concepts which depict tall, sleek stormtroopers.

While the aesthetics and production decisions which have gone into designing stormtroopers and their many variants for the films (and other mediums) are explored in Beyond the Armor, Windham and Bray also explore the variety of stormtrooper toys and collectibles which have been created over the years. Admittedly, these sections really stood out as I know very little about the way the toy industry operates, but also because the authors discuss a handful of toys which I had as a kid. And for me, no stormtrooper-related toy described in the book stood out more than the Micro Machines Stormtrooper/The Death Star transforming action set because it is one of the Star Wars toys I still own from my childhood. Plus, it is still in perfect condition, a Star Wars miracle considering all of the other Micro Machines action sets I owned did not survive the disaster area known as “Jeff’s room.” 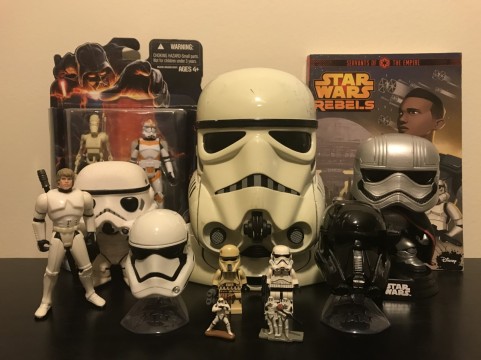 The Micro Machines Stormtrooper/The Death Star transforming action set (center) with a few other pieces of my “Trooper Collection.”

The relationship between stormtroopers and fan culture is also explored in Beyond the Armor, with special emphasis focusing on the 501st Legion. A fan-led organization that specializes in the “bad guys” of Star Wars, the 501st Legion, founded by Albin Johnson in 1997, combines a love of costuming with community service. While the information about fan culture and the 501st Legion was not as interesting or relevant to me, it is never-the-less a critical aspect of the book which helps to highlight the cultural legacy of stormtroopers specifically, and Star Wars more generally. And, at the very least, one will undoubtedly walk away from the book knowing far more about Star Wars fan culture than when they first started reading. I certainly did.

As I said at the outset, Stormtroopers: Beyond the Armor was an unintended purchase but, in the end, one that worked out for the best. While reading an encyclopedic book with behind-the-scenes information about Star Wars is not everyone’s cup-o-tea, this book is definitely one worth getting, especially if you happen to stumble upon it for a reduced price like I did. Admittedly, there are some sections that drag on a bit more than I thought necessary but this never kept me from wanting to keep reading and learning. In all likelihood, I won’t be reading Beyond the Armor again from cover-to-cover unless I get really ambitious, but it will definitely come in handy as a reference book when I need to refresh my memory about some stormtrooper-related topic. Plus, if nothing else, it will look pretty cool on one of my Star Wars bookshelves.

This month’s Star Wars ComLINKS topic is Favorite Trooper and I have to say, when it was announced I got really excited but also knew that it was gonna end up being hard to narrow down which type of trooper I love. In fact, right after I read the topic on Anakin and His Angel, I jokingly told Jenmarie (who runs the site) that my choice was “all of them.” For a hot minute, I actually thought about writing about all of the troopers in Star Wars, explaining my love for each one, but I decided to nix that idea because 1) I don’t have the time and 2) the topic is singular, not plural. So, I buckled down and spent some time doing reflecting and it hit me:

My Favorite Trooper in Star Wars is the Cold Weather Assault Stormtrooper, otherwise known as the Imperial Snowtrooper.

I feel like I have said this about a hundred thousand times in other posts, but my favorite Star Wars movie has always been The Empire Strikes Back. A while ago, I wrote about how my favorite creature, the Wampa, is introduced in the film, and I have also written posts on my love of the Imperial Walkers and another on my fascination with General Veers. It should really come as no surprise, then, that my favorite type of trooper in Star Wars are the unique-looking soldiers who storm into the Rebel base on the ice planet Hoth. That said, I should note that my fascination with the Snowtrooper is not superficial, a mere by-product of my enduring love of The Empire Strikes Back. Rather, it is really the other way around – the various facets that make up the film provide all of the reasons I love it, especially those facets dealing with the Empire.

You see, like Senator Ransolm Casterfo in Claudia Gray’s novel Bloodline, I too have always had a fascination with the Empire. This is not to suggest I support or admire the unjust, dictatorial and genocidal tendencies of Imperial rule, but rather that I have always found myself wanting to know more about the “bad guys” in Star Wars in hopes of coming to a deeper understanding of how it operates on every level. In this regard, I have always felt that of all three films in the Original Trilogy, The Empire Strikes Back provides the most fascinating look at the Empire, although this hardly means I dislike what we learn in the other two films. Rather, The Empire Strikes Back takes the monolithic Empire from A New Hope and adds a dynamic new way of thinking about it while also maintaining its terrifying essence.

The most obvious way the film does this (though not the only way) is by utilizing elements of the Imperial military first introduced in A New Hope – Star Destroyers, TIE Fighters, and Stormtroopers – while also adding to the Empire’s arsenal of soldiers and weapons. Thus, we are introduced to a handful of new military assets in the film: Probe Droids, a Super Star Destroyer, TIE Bombers, All-Terrain Armored Transports (AT-AT), All-Terrain Scout Transport (AT-ST), and of course, the Snowtrooper. On the surface, these new elements visually represent the breadth of the Imperial military, showing that the Empire has far more at its disposal than previously thought. However, these assets also add incredible depth to Imperial power, depth that I continue to uncover in new ways each time I watch The Empire Strikes Back.

At this point, I could very well go into detail about the depth I am speaking of as it relates to each military asset introduced in the film. However, since the focus of this piece is my favorite trooper in Star Wars, I will end with some thoughts on the introduction of the Snowtrooper in The Empire Strikes Back and how, as a kid, their appearance added a dynamic dimension to my understanding of the Empire.

The first thing that should be said about the Snowtroopers is perhaps the most obvious: their appearance in The Empire Strikes Back is very brief. The first Snowtrooper we meet is in a short scene with General Veers, the Imperial officer leading the assault on Hoth in an AT-AT. Speaking to the soldier – presumably a commander of some type – Veers states that “All troops will debark for ground assault.” Otherwise, the bulk of scenes involving the Snowtroopers take place inside the Rebel Base, the men and women racing through the halls along with Darth Vader. In turn, as the Millenium Falcon attempts to escape, we see the troopers set up their weapons and begin firing at the ship, with return fire from the Falcon killing a handful of the white clad soldiers.

Like I said, their appearance in the film is very brief. And yet, even in their brevity, the Snowtroopers left an indelible mark on me, an enduring fascination that I have never been able to shake (not that I want to). On the surface, this mark is purely aesthetic, an interest in the outfit these soldiers wear into battle. In all honesty, I have always felt that the Snowtrooper uniform is quite beautiful, an admittedly odd sentiment but one I can no more explain than the beauty I see in a flower.

But passing beyond the aesthetic, what the Snowtrooper taught me about the Empire is something far more pointed. It showed me that the Empire utilizes Stormtrooper units that are trained and equipped for certain contingencies, in this case warfare on a icy planets. Granted, we do see different types of Stormtroopers in A New Hope – Sandtroopers and Spacetroopers – but these are all variations on the standard armor that most of these soldiers wear. The Snowtrooper, on the other hand, stands out because its armor is fundamentally different from these other Stormtrooper units. And it is this very reason, this difference in armor, that helped pry open the door to the my Imperial imagination and made me realize these were not just ordinary Stormtroopers with different armor, but an elite type of Stormtrooper with a singular military purpose.

And with that said, I leave you with a thought that has rattled around in my brain for as long as I can remember: while I absolutely love the Imperial Walkers introduced in The Empire Strikes Back, a small part of me wishes, instead, that we could have witnessed the specially trained Snowtroopers methodically capturing the Rebel trenches on Hoth as a blizzard rages around them…that would have been a hell of a sight.