It has been a while since I added a new post to my Protocol Droid series so I thought I would return to it once again. For this piece I decided to highlight another droid from The Clone Wars movie, in large part because the film is often overshadowed by the The Clone Wars animated series. Personally, I have always really liked the film, even believing (rightly, in my humble opinion) that it should be listed/ranked with the other Star Wars films. Just because it is animated does not make it any less of a Star Wars movie, but I will save that conversation for another occasion.

Previously, I brought attention to TC-70, Jabba the Hutt’s protocol droid which plays a small role as a translator in The Clone Wars movie. This time, I wanted to go from the TC-series to an RA-7 series protocol droid that also plays a minor but significant role in the film.

Masquerading as the caretaker protocol droid in the B’omarr Monastery on the planet Teth, 4-A7 is actually a spy working for the Separatist Alliance. When Jedi Knight Anakin Skywalker and his padawan Ahsoka Tano, along with the clone troopers of Torrent Company, defeat the battle droids garrisoned in the monastery 4-A7 greets them with a grateful attitude. “You have liberated me from those dreadful battle bots,” 4-A7 humbly states, deflecting any suspicions that may be raised. With the Jedi inquiring about the location of Jabba the Hutt’s infant son Rotta, 4-A7 points them towards the “detention level” where the child is being held captive by the Separatist droids.

Unbeknownst to Skywalker or Tano, rescuing the child is precisely what the Separatist’s want. With Rotta in the possession of the Jedi, 4-A7 performs his true task: recording the Jedi with the Huttlet so Count Dooku can show Jabba that it was the Jedi Order who kidnapped his son. His act as caretaker completed, 4-A7 plays one final and small part in the film a short time later.

With the Separatists launching an assault on the Monastery, this time to liberate Rotta from the Jedi and the clones, Skywalker and Tano flee with the Hutt to a landing pad on a nearby plateau. There, it is Ahsoka who discovers 4-A7 as she heads towards the nearby ship. “Hey, you’re that caretaker droid, I wondered what happened to you,” she states, the droid clearly caught off-guard by her presence. As the masculine-sounding 4-A7 explains “his” desire to get away from the fight, a few battle droids walk into view and tell the “caretaker” that they are ready to leave. “His” cover blown, 4-A7 orders the battle droids to attack but Ahsoka is up to the challenge, dispatching them with ease. “Don’t you dare,” 4-A7 indignantly declares as the young Jedi turns her green blade towards the droid. But Ahsoka is not swayed. With a swipe of her lightsaber, the disembodied head of 4-A7 bounces and rolls down the ramp of the ship, the phrase “don’t you dare” slowly fading away as the caretaker’s system shuts down.

Given the ubiquity of droids in the Star Wars universe it should come as no surprise that some of these robots would be members of notable pirate gangs. An RA-7 series protocol droid with distinct green and white plating, 4A-R2 has the esteemed distinction of belonging to the infamous Ohnaka Gang.

Led by the fan-favorite Hondo Ohnaka, the Ohnaka Gang was first introduced along with its namesake Captain in the The Clone Wars Season 1, Episode 11: “Dooku Captured.” When we first meet Ohnaka and his predominately Weequay crew they are rummaging through the wreckage of two ships on the planet Vanqor. Count Dooku, having slipped past his Jedi pursuers, Anakin Skywalker and Obi-Wan Kenobi, happens upon the pirates as they plunder his crashed solar sailer and the shuttle which the Jedi had piloted. Seeing Count Dooku approaching, Hondo is surrounded by a handful of Weequay pirates. But look even more closely and you will notice that a droid is also present when Hondo and Dooku begin speaking (see featured image).

Admittedly, it was a number of years after “Dooku Captured” originally aired that I even noticed this pirate protocol droid, 4A-R2, standing with the group. Intrigued, I scoured the remainder of the episode for signs of this green and white plated droid but could not find it hiding in the background of anymore scenes. Nor, to my knowledge, does 4A-R2 appear in the next episode, “The Gungan General,” which continues the story of Ohnaka’s gang at their base of operations on the planet Floruum. 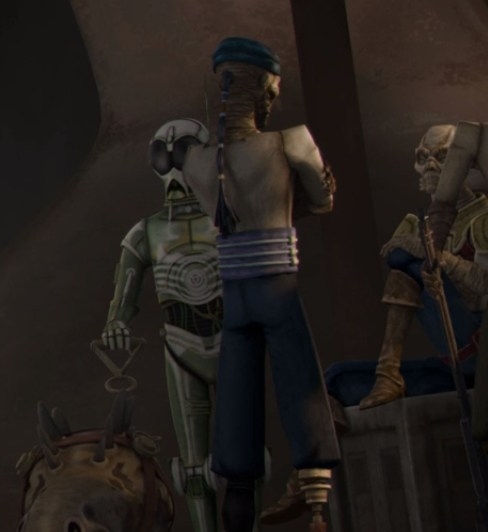 In fact, it is not until the final episode in the second season of The Clone Wars, “Lethal Trackdown,” that this protocol droid appears again and, so far as I can tell, for the final time. Late in the episode, Jedi Padawan Ahsoka Tano runs by Hondo and a handful of his gang as she chases the bounty hunter Aurra Sing. As Ahsoka passes the group, one of the Weequay pirates raises a rifle to shoot at her but Hondo intervenes, forcing the weapon to be lowered. With this action being the focus of the scene it is easy to miss 4A-R2 standing on the edge of the group. Look closely, though, and you may notice that the protocol droid is also passively active in the scene, holding the leash that is attached to one of Ohnaka’s pet massifs.

And yeah, that is it. 4A-R2 appears in The Clone Wars on two separate and equally brief occasions. Is it possible that this pirate protocol droid is hidden somewhere else in the The Clone Wars and I just haven’t found it? Perhaps. I suppose I will just have to keep re-watching episodes of the show Hondo and his gang to see if 4A-R2 is up to some really important pirate stuff like pillaging and/or dog walking.

An RA-7 Series Protocol Droid drifts through the vast darkness of space, unafraid but “strangely calm” in “the silence” and “solitude.” Overcome by the euphoria of be-ing in this moment, “in a world all my own,” the droid, AP-5, begins to sing. As he does, a herd of baby neebray flock surround him. With their vibrant colors and dancelike movement, the neebray accentuate AP-5’s song, adding to the tranquility of the moment.

Admittedly, this scene from “Double Agent Droid, the 19th episode of Star Wars: Rebels third season, is entirely unexpected. With the obvious exception of those characters who are already musicians, it is strange for anyone in Star Wars to break into song. What makes this even more random is that the character doing the singing is AP-5, a protocol droid with the same languid tone and delivery as the late Alan Rickman. Coupled with the droids grumpy personality and dry sense of humor, that AP-5 is the one to sing about the beauty and wonder of the universe is an absurd juxtaposition that immediately catches one off-guard.

For many, the song was undoubtedly funny, a moment of welcome levity in an episode of Rebels. After-all, as showrunner Dave Filoni points out, the intention of the song, random as it may be, was meant to inject humor into the seriousness of show. For some, the song may have been off-putting, an absurdity that is annoying, adding nothing but pointless filler to the animated show. And still for others, the song very well may have been forgettable, overshadowed by the more exciting bits of the episode in particular and the series in general.

What did I think of it? Well, the fact that the languid and grumpy AP-5 is caught-up in the moment, singing how he “finds it easy to see” that he “fits into” beauty surrounding him, is certainly funny. But while I can appreciate the levity, I would also describe the song, and the scene as a whole, as utterly delightful. In a way, it serves as a reminder that every character, even those playing a minor or background role, belongs in the Star Wars universe. Facing his own mortality, AP-5 recognizes and affirms that there is no reason to be afraid as he drifts through space precisely because his existence has always had meaning. He has always fit into, and helped make, this universe more spectacular, more beautiful, more wonderful.

And the same is true for each one of us. Like AP-5 and all of the characters in the Star Wars universe, you and I perfectly fit into this universe. Honestly, what better way to capture this euphoric sense of belonging than through song?