The very first time we “meet” Gardulla the Hutt is when she is referenced by Anakin Skywalker in The Phantom Menance. Specifically, the young slave boy explains to Padmé Amidala that he and his mother were originally owned by the female Hutt, but that Gardulla had lost them in a bet to their current owner, Watto. From there, the scene moves on and Gardulla’s small shout-out fads into the background of the film. That is, of course, until she actually appears next to Jabba the Hutt just before the Boonta Eve Classic gets under way!!! While the race announcers proclaim the arrival of Jabba, unfortunately they do not announce that Gardulla is also with him. In fairness, it makes sense that the  Jabba’s  entrance is announced since he is hosting the Classic. Plus, giving Jabba the Hutt a brief cameo in The Phantom Menance was, realistically, the point to this scene. 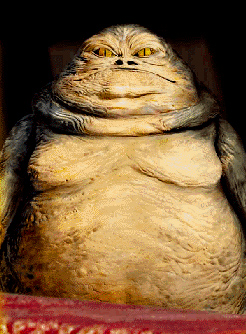 However, since the announcers don’t mention Gardulla’s presence at the Classic, I spent a long time after the release of The Phantom Menance having no idea who the mysterious, female Hutt actually was. It wasn’t until a handful of years later, at some point in the early 2000s, that I finally learned that the unknown Hutt was Gardulla, the former owner of Shmi and Anakin Skywalker. While this small fact didn’t dramatically change the way I view/experience The  Phantom Menace, it was pretty cool finding out the identity of the mysterious Hutt. And it does, at the very least, add an interesting layer to the Boonta Eve Classic, the fact that young Skywalker’s former master was present to watch him win the race. Well, that is if she didn’t fall asleep like Jabba.

Following the release of The Phantom Menace, Gardulla went on to make several appearances in the Expanded Universe (EU). While I won’t recap all of her stories from the EU, it is worth mentioning that in the Star Wars: Bounty Hunter video game, Gardulla is shoved into the arena that houses her pet krayt dragon and is subsequently eaten. However, Gardulla survived “the swallowing” because the krayt dragon – according to Story Group member Leeland Chee – found her indigestible.

Otherwise, with the EU no more, Gardulla’s only appearances  in Star Wars (not counting reference books) have come in The Phantom Menace and The Clone Wars Season 3 episode “Hunt for Ziro.” In this episode, the Hutt Council – the body that governs the Hutt Clan – convenes in Gardulla’s palace on Nal Hutta, the Hutt homeworld. While Gardulla is not one of the five Hutts on the Council (the Databank wrongly states she is), she none-the-less presides over the meeting, acting/speaking on behalf of the absent Jabba. For this reason, I think it is safe to say that Gardulla is the Council’s “sixth Hutt,” having just as much (if not more) wealth and power than some of the other Hutts on the Council.

Still, it is disappointing that Gardulla is not an official member of the Hutt Council for one very specific: –  Gardulla is a female Hutt, one of the only female Hutts in the canon. She is a Hutt with incredible influence, a crime lord whose reach most certainly spreads far beyond her palace on Nal Hutta or her dealings on Tatooine. True, she may not be on par with Jabba, but Jabba clearly trusts her to represent his interests on the Council. Most importantly, what this shows is that Gardulla has worked her way into the upper echelon of the Hutt Clan, an upper echelon that is dominated by male Hutts. 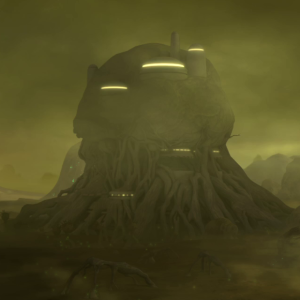 And yet, she is not a formal member of the Hutt Council because…well, in all honesty, the show runners of The Clone Wars didn’t make her one. Still, I am glad she was included in “Hunt  for Ziro,” and that her dominating presence is felt, albeit briefly, in the episode. Moreover, Gardulla could easily be elevated to full-member given the events of The Clone Wars episode “Eminence.” In the episode, Sith apprentice Savage Opress creates an opening on the Council when he kills Oruba the Hutt, and there is no Hutt more deserving than Gardulla to take Oruba’s place. Granted, another member of Oruba’s family should technicaly take the deceased Hutt’s place on the Council, but I have a feeling Jabba could use his influence to secure the spot for Gardulla.

Regardless, Gardulla is also deserving of far more attention in the Star Wars canon, and  I want to know what happened to her after we see her in “Hunt for Ziro.” Her elevation to Council Member after Oruba’s death is one way to do this, but I’m also interested in knowing, if nothing else, how she reacted to the death of Jabba. The novel Aftermath establishes that the Hutt Council, months after his death, had not yet filled the seat on the governing body left vacant by Jabba’s demise, and I can definitely picture a scenario in which Gardulla would jockey to be the leader of the body. This doesn’t mean, though, that I think she would also maneuver to steal away the power and wealth Jabba left behind. While I have no doubt a number of Hutts would try to soak up what was left behind by the late crime lord, Gardulla just feels like the type who would be far more interested in ensuring the Hutt Clan survived their leaders death. Besides, given her close ties to Jabba, I can also imagine Gardulla watching over and mentoring the rightful heir to the the late Hutt’s criminal empire – Jabba’s son, Rotta.

My general musings aside, I really would be thrilled to see Gardulla the Hutt make some more appearances in the Star Wars universe, whatever that may entail, and I don’t think I am alone in this wish. At least, I don’t think I am, right? Would you like to see more of Gardulla Besadii the Elder in the Star Wars canon? Leave a comment below and let me know what you think about Gardulla.