First introduced in Timothy Zahn’s 1991 novel Heir to the Empire, Grand Admiral Thrawn has always been my favorite Star Wars character. The white uniformed Imperial officer with red eyes and blue face – an alien of the Chiss species – captivated me as a young Star Wars fan. Watching the films as a youth, I was intrigued by the Empire but did not identify with them. How could I? They were the bad guys, the evil villains dealing death and destruction who had to be stopped by the likes of Luke Skywalker and the other heroes of the Rebellion. And yet, in 1993 when I read Heir to the Empire for the first time I was mesmerized by Grand Admiral Thrawn. Here was an Imperial unique not only in appearance but in demeanor, an intriguing character, a captivating Star Wars villain. Although at the time I could not fully appreciate all of the nuances of Heir to the Empire, all of the intricacies and connections Zahn had created in the novel, I could never-the-less identify with a character who was different and new. 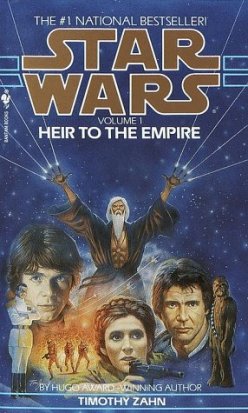 “Heir to the Empire”, the first novel in The Thrawn Trilogy.
Photo Credit: Bantam Spectra

Admittedly, there is no easy way to articulate just how my love for Thrawn has grown since that time. While memories from my youth remain rooted in my head, those memories are scattered and sporadic. I can recall, for example, playing the 1994 TIE Fighter computer game and encountering Thrawn through that medium, a medium that offered me a visual depiction of the white uniformed officer. While Thrawn is not at the center of the game, one event in TIE Fighter never-the-less grounds my overall memory: Emperor Palpatine promoting Vice Admiral Thrawn to the elite status of Grand Admiral and ordering him to track down the traitor Demetrius Zaarin. This was, and still is, an event in Star Wars as meaningful to me as watching the climax of A New Hope or the revelation that Darth Vader is the father of Luke Skywalker. In short, my experience of Thrawn, from the very start, was as real to me as anything else in Star Wars. It did not matter that he was never in the Original Trilogy. No, all that mattered was that Grand Admiral Thrawn commanded a presence within the corner of my mind dedicated to Star Wars. He still does.

Like that moment in TIE Fighter, other “Thrawnian” moments in his story-arc stand out. But there is one moment that is light-years beyond all the rest: the way the Grand Admiral is introduced in the first chapter of Heir to the Empire.

The Art of First Impressions

It is not just that Thrawn shows up in the first chapter of Heir to the Empire, it is how Timothy Zahn chose to introduce him that stands out – through the eyes of, and interactions with, Captain Gilad Pellaeon. Throughout the entirety of Zahn’s Thrawn Trilogy (of which Heir to the Empire is the first novel), Pellaeon – commanding Thrawn’s flagship – serves not only as an independent and capable character in his own right, but also as a foil to Thrawn. While Pellaeon is established as a competent commander – reminiscing in the first few pages about leading the Imperial retreat from the Battle of Endor – once he is placed in the same room as the Grand Admiral it becomes apparent that the two exist on different plains of military acumen. How the reader discovers this is in the most obvious way possible: in the form of a battle.

It is Pellaeon who leads the reader to Thrawn, the Captain maneuvering through the corridors of the Star Destroyer Chimaera to inform the Grand Admiral of a successful scan raid on the Obroa-skai system. Yet, as Pellaeon enters a room to meet with Thrawn, our introduction to the Grand Admiral takes a curious turn. This room, we quickly learn, is filled with the holograms of artwork. Rather than concerning himself with the inevitable New Republic attack which he is confident will now unfold following the scan raid – an attack Pellaeon is skeptical will come – the Grand Admiral instead asks the Captain a rather odd question:

“Tell me, Captain, do you know anything about art?”

This singular question, and the brief lesson in art history which unfolds, establishes the uniqueness of Thrawn. He is a student, not only of military tactics and strategy, but of every conceivable topic that will enable him to defeat an enemy. But it is the study of art that truly sets Grand Admiral Thrawn apart, an aspect of his character that is returned to again and again (even in the new version of Thrawn in the Disney canon). It is in this moment that we are not simply introduced to Thrawn the character by Captain Pellaeon, but we are introduced to Thrawn the genius, the savant, the truly grand. Cool and collected, as if his job is that of a museum curator, the Grand Admiral articulates the nuances of artistic pieces to Captain Pellaeon.

“Thrawn gestured to a part of the inner display circle to his right. ‘Saffa paintings,’ he identified them. ‘Circa 1550 to 2200, Pre-Empire Date. See how the style changes – right here – at the first contact with the Thennqora. Over there-‘ he pointed to the left-hand wall ‘-are examples of Paonidd extrassa art. Note the similarities with the early Saffa work, and also the mid-eighteenth-century Pre-Em Vaathkree flatsculp.'”

Immediately upon finishing his tour through Saffa and Paonidd art history, the attack comes, and with the same cool and collected demeanor, Grand Admiral Thrawn enacts his strategy to defeat the oncoming New Republic ships. His knowledge of art will play a role in the battle.

Again, it is Pellaeon, acting as the foil to Thrawn, who sets up the reader to truly understand the military prowess in the mind of the Grand Admiral. Learning that the attack force consists of four Assault Frigates and three wings of X-Wings (108 Starfighters in total) it is Pellaeon, and not Thrawn, who issues a command.

“‘Run engines to full power,’ he [Pellaeon] called towards the intercom. ‘Prepare to make the jump to lightspeed.'”

Without missing a beat, Thrawn countermands that order, instead issuing an order for TIE pilots to head to their stations and for the Chimaera’s shields to be activated. In turn, the Admiral issues another order for the “three nearest sentry ships to attack.” Watching the holographic tactical display – which had replaced the holograms of art – Pellaeon and Thrawn look on as three blue dots representing the sentry ships speed towards the attackers. As one blue dot disappears, Thrawn again issues an order for the ships to pull back and for the “Sector Four line to scramble out of the invaders’ vector.” In other words, Thrawn gives the attackers a clear path to the Chimaera. 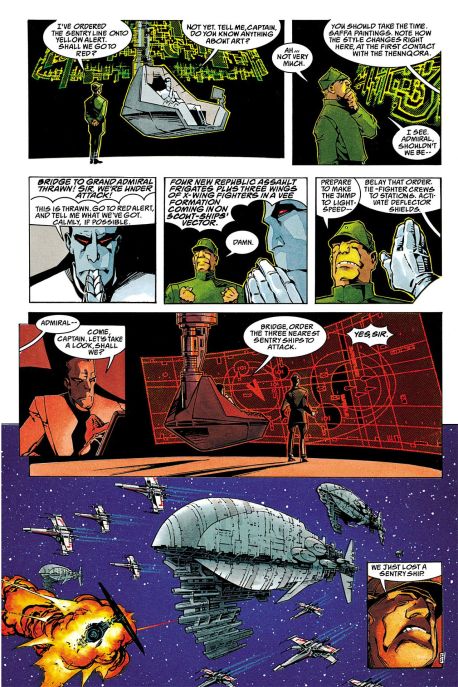 A page from the graphic novel version of Heir to the Empire.
Photo Credit – Dark Horse Comics

Confused, Pellaeon inquires: “Shouldn’t we at least signal the rest of the Fleet?” As if he had already anticipated the question, Thrawn responds by noting that “the last thing we want to do right now is bring in more of our ships…after all, there may be survivors, and we wouldn’t want the Rebellion learning about us. Would we.”

Before I continue, I should note that at no point does one get the impression that Captain Pellaeon, or any of the other subordinates on the Chimaera, are incompetent. As I previously said, Pellaeon is established as being an effective commander by virtue of his role at the Battle of Endor. Likewise, his order to flee into hyperspace, and his question about bringing in reinforcements, serve as clear examples of standard military protocol, the way the Imperial Navy is supposed to operate when it is severely outgunned. And this is what makes Thrawn’s statement about not wanting any survivors all the more fascinating. Pellaeon, a veteran of the Imperial Navy, does not believe his ship and crew – a crew that is young and inexperienced – can take on the attackers. The Grand Admiral not only has the opposite opinion, but he is confident he will annihilate his opponent.

Immediately after saying he does not want there to be survivors, Thrawn gives the order which will ensure this happens.

“‘Bridge: I want a twenty-degree port yaw rotation – bring us flat to the invaders’ vector, superstructure pointing at them. As soon as they’re within the outer perimeter, the Sector Four sentry line is to re-form behind them and ham all transmissions.”

The Bridge, and Pellaeon, are admittedly confused, but Thrawn demands obedience. As the Star Destroyer rotates into position, the Grand Admiral orders all TIE squadrons to launch and head in the opposite direction, away from the enemy. Pellaeon, to his credit, recognizes the tactic: “a classic Marg Sabl maneuver.”  But Pellaeon also questions whether the attackers would really fall for “anything that simple.” In his confidence, Thrawn is positive the attackers will fall for it AND be destroyed in the process. Of course, he turns out to be right.

As if on cue, the attackers change their strategy, playing into Thrawn’s hands. Pellaeon is stunned, inquiring “What in the Empire are they doing?” To this, the Grand Admiral’s response is laced with the brilliant depth of his character:

Still stunned, it dawns on Pellaeon precisely how Thrawn had figured out he faced an Elomin task force. “‘That sentry ship attack a few minutes ago…you were able to tell from that that those were Elomin ships,'” the Captain declares. Grand Admiral Thrawn’s response is as predictable as it is unexpected. “‘Learn about art…‘ he tells his second-in-command. ‘When you understand a species’ art, you understand that species.'”

An hour later, we are told, the battle was over.

Conclusion to an Introduction

I must admit that, as I look back over what I have just written above, my retelling of Thrawn’s introduction is only able to partially capture the gravitas of his character. Then again, my intention was not to perfectly recreate the first chapter of Heir to the Empire. Rather, my description serves to acknowledge that there is a profound and impressive literary depth to the first few pages of the novel, a depth that is woven into the rest of the novel and the entire trilogy. Or, to put it differently: Timothy Zahn is one hell of a writer and this is apparent right from the beginning.

Most importantly, the depth in the opening chapter of the novel penetrates to the very core of Grand Admiral Thrawn. It offers the reader insight into this brand new character, identifying him as a formidable and terrifying villain who truly is the “Heir” to the Galactic Empire. At the end of chapter one, the Chiss tells Pellaeon that his plan is to the solve the only puzzle worth solving: “The complete, total, and utter destruction of the Rebellion.” Following his art lesson and his masterful annihilation of an enemy attack, this is clearly no idle threat. Grand Admiral Thrawn really is capable of bringing the New Republic – the Rebellion – to its knees. But if you want to know more about how the white uniform guy with red eyes and a blue face does about doing that, you will just have to reread the trilogy or pick it up for the first time.

All quotations in this piece are from the 1992 mass market paperback edition of Heir to the Empire.