“Of all the Jedi, why did I have to end up with Skywalker?” – Admiral Yularen

Of all the iconic scenes in Star Wars: A New Hope, one that truly stands out to me is when Darth Vader chokes Admiral Motti due to Motti’s “lack of faith.” With an upraised hand, Vader begins to slowly crush Motti’s windpipe while the other Imperial officers at the table sit by and watch. Revealing that Vader has supernatural powers, and that he is even willing to turn these powers against his allies, this scene goes a long way towards bolstering Darth Vader’s status as an iconic villain.

But this post is not going to be about Vader. There will be plenty of those posts in the future. Rather, who I really want to focus on is the White Uniform Guy with a Mustache sitting to the right of Admiral Motti.

Mostly expressionless throughout the scene, his biggest reaction to what is happening comes when the choking takes place. However, this is not White Uniform Guy’s only scene in the film, as he also walks past Han, Luke, and Chewie when they are waiting for an elevator.

Two scenes, that is it. Who is this White Uniform Guy with a Mustache? What is his story?

Some May Know Him, Others May Not

Recently, I received a couple of new Lego Star Wars sets in the mail that I bought during the Lego May the Fourth sales event. During this event, Lego offers an exclusive promotional mini-figure if you spend a certain, not insignificant amount of money. I am not going to tell you how much I spent, but let’s just say I received the mini-figure and we will leave it at that, okay? Great!

Here is a picture I took of my new, totally sweet mini-figure: 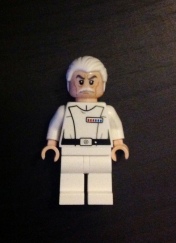 OH MY GOSH, IT’S WHITE UNIFORM GUY WITH A MUSTACHE! You had to see that coming…

Okay, so White Uniform Guy with a Mustache is actually a character by the name of Wulff Yularen. You would be hard-pressed to find Yularen by name in the film credits of A New Hope, though, because he isn’t actually there.

Portrayed by B-list actor Robert Clarke in the film, Mr. Clarke did not receive a film credit for his role as Yularen for, so far as I can tell at least, two reasons. The first is because a lot of extras in the film went uncredited. In fact, even James Earl Jones, the iconic voice of Darth Vader, did not receive a credit in the film.[i]

Secondly, the character Mr. Clarke was portraying was an unnamed background character at the time of filming. It would not be until the release of the Star Wars: Customizable Card Game (circa 1995) that the character Mr. Clarke portrayed would officially receive the name Wulff Yularen, as well as a very tiny snippet of back story as a Colonel in the Imperial Security Bureau (ISB).[ii] Though the Card Game no longer counts as part of the “official” Disney canon, Yularen and his back story have been maintained and even expanded.

From the Clone Wars to the Death Star

Following the movie, Yularen would also appear in a number of episodes of the animated series itself, and new details about him would begin to emerge.

Throughout the Clone Wars, Admiral Yularen commanded Jedi General Anakin Skywalker’s flagship the Resolute. However, Yularen was not always thrilled to be working with the reckless, young Jedi (see the quote provided at the beginning of the post). None-the-less, Yularen would participate in a number of engagements in the war, including (to name a few): Christophsis, Quell, Ryloth, and Second Geonosis.

Though The Clone Wars animated series has ended, Yularen’s back story garnered a bit more development in the novel Tarkin from author James Luceno. In Tarkin, which takes place 5 years after the events of Revenge of the Sith, the reader discovers that after the Clone Wars ended, Yularen resigned his naval commission for the rank of Colonel in the ISB, and served as a liaison between the Bureau and Military Intelligence. In turn, at the end of the book, Yularen is promoted to Deputy Director of Naval Intelligence, a subset of Military Intelligence. As well, Colonel Yularen has also played critical roles in Timothy Zahn’s novel Thrawn, being a close confidant of the rising, Chiss officer, and also appears in an episode of Star Wars Rebels (Season 3, Episode 17 – “Through Imperial Eyes”).

In A New Hope, then, Colonel/Deputy Director Yularen is an important intelligence figure serving aboard the Death Star. At this point, no official story has been established that explains his placement on the battle station, though one can imagine a number of reasons for the distinguished, albeit fateful posting.

Though on the surface of things his presence at the conference table on the Death Star still does not add a great deal of weight to the scene itself, Wulff Yularen’s backstory does contribute an additional dimension to the scene which did not originally exist. He may not participate in the dialogue itself, but he is now much more than the unnamed background character he used to be.

In a sense, Wulff Yularen’s character development points at the exciting intricacies of storytelling in the Star Wars universe. The fact that an unnamed background character can emerge from the shadows and be propelled into relevance is one of the many reasons that I continue to love Star Wars. Discovering something new about a character, particularly an unknown background character, and their connection to other individuals and events, is just one of the many reasons Star Wars remains so captivating. And perhaps even more importantly, this also creates different avenues for the imagination, as one is able to engage with and experience the stories in new and dynamic ways. Just think about all the other characters out there, new and old, who are waiting for their time to shine: to receive a name, a back story, the chance to be a promotional Lego mini-figure, and the ability to impact the way you and I experience Star Wars.

Of course, at least in my case, with new developments in Star Wars also come new thoughts and questions.

In the case of Wulff Yularen, I am left pondering a question that, without any of his added back story, would have never otherwise crossed my mind. In short, should I feel bad that he died on the Death Star? Knowing what I do about his background as a Republic officer, but also his loyalty to the Empire, how am I supposed to react to his death? Should I even care that he dies? Is it wrong for me to feel remorse for the death of a loyal follower of the Emperor? Or, did he get what he deserved when Luke’s proton torpedoes hit the main reactor?

Frankly, I am not really sure how to answer these questions.

[i] This was actually Mr. Jones own decision as he felt David Prowse, the actor inside the Vader costume, deserved all the attention.

[ii] I bet a number of you still have these cards from this card game! In fact, I know one friend of mine who had a ton of them…he knows who he is.