Making its only appearance in “Brain Invaders,” a Season Two episode of The Clone Wars, TC-326 is the military protocol droid which assists Anakin Skywalker when the Jedi interrogates the Geonosian Archduke Poggle the Lesser. Demanding to know how to stop an infestation of parasitic brain worms on-board his Padawan’s starship, Anakin relies on the TC-series protocol droid with masculine programing to translate what Poggle says. His attempt at a mind probe of the Archduke failing, Anakin then turns to violence and torture, Force choking the Geonosian while TC-326 stands in the corner. 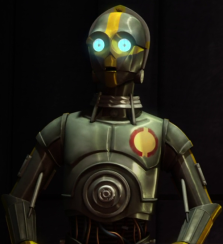 Truthfully, there is not a great deal more to say about TC-326 beyond just a handful of points. The protocol droid never shows up in another episode of The Clone Wars so far as I can tell, and even in “Brain Invaders” it only appears in the scene described above and, briefly, in an earlier scene at the beginning of the episode. What I can offer, though, is a question I have often wondered regarding the protocol droids involvement in the interrogation of Poggle: did Anakin wipe TC-326’s memory?

Moments after Anakin tortures the Archduke, we see him explain to the other Jedi present on the Venator-class Star Destroyer that he was able to extract the information from Poggle they needed. Surprised, the gathered Jedi Masters – Luminara Unduli, Ki-Adi Mundi, and Obi-Wan Kenobi – question how he was able to do this, wanting to know how he was able to get Poggle to cooperate. Unsurprisingly, Anakin ignores their questions, instead declaring that “there wasn’t time to get the rest of you” and “all that matters is he [Poggle] told me how to stop the worms.”

While this exchange is brief, with Anakin otherwise blowing off their inquiries, there is also an obvious concern among the Jedi Masters, particularly Unduli and Mundi. They know something is amiss and one can easily presume their concern was heightened by Anakin’s dismissive tone. This, then, is why I have oftened wondered whether Skywalker wiped TC-326’s memory, to ensure that the protocol droid could not be interrogated by the other Jedi about the technique(s) he used to extract information from Poggle.

This is not to suggest an answer needs to be provided regarding the memory wipe, or whether the Jedi Master’s ever investigated the matter. Some things are better left to the imagination, not needing any type of “official” explanation. For my part, I like to imagine that Anakin did not wipe TC-326’s memory. Instead, so caught up in trying to save Ahsoka Tano, his Padawan, as she fought the brain worms lightyears away, the Jedi Knight simply forgot. In turn, I also like to imagine that Unduli and Mundi did investigate, wanting to know precisely how Anakin convinced Poggle to assist them. And since TC-326 was the only witness available to them, I like to imagine TC-326 describing Skywalker’s dark actions with an emotional less, matter-of-fact tone as the two Jedi Masters listen in silent horror.

What happened after that? Well, I will leave that to your imagination.

4-A7: The Caretaker Protocol Droid