I was browsing some discounted books at Barnes & Noble one day and came across Lando’s Luck on the shelf. A middle-grade novel by Justina Ireland (with illustrations from Annie Wu) which was released in October 2018 as part of the Flight of the Falcon series of books and comics, I decided to give Lando’s Luck a chance and ended up taking it home with me. Besides, since the book was on clearance it was easier to justify the purchase, especially if, in the end, I ended up disliking it. Except, I actually really enjoyed the novel and, having finished reading Lando’s Luck, I am interested in continuing the Flight of the Falcon series.

Set before the events of Solo: A Star Wars Story – with the exception of the Prologue and Epilogue which are set around the time of The Force Awakens – Lando’s Luck chronicles the “flight of the Falcon” to the planet Hynestia, a frigid world best known for its prized gherlian furs. There, Lando Calrissian ends up being forced by Queen Forsythia Jin – the Assassin Queen – to deliver a valuable possession to the Galactic Empire on behalf of her world. This possession, the Solstice Globe, will be delivered to the Empire in lieu of Hynestia’s regular tribute of gherlian furs, a result of the latest shipment of furs having gone missing.  However, the Queen’s 13-year old daughter Rinetta has different plans for the Solstice Globe and, stowing away on the Millennium Falcon, sets out to recruit Lando and the droid L3-37 to her cause. 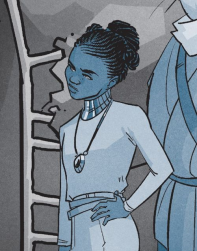 The protagonist of the novel whom young readers are meant to identify with, Princess Rinetta is a precocious girl who is determined to return the Solstice Globe to it’s rightful owners: the Lynna from the planet Livno III. The Globe, we come to learn, is one of three orbs – the other’s being the Rain Globe and Breeze Globe – which were created by “The Architects” to power a machine that provides Livno III with a stable, habitable climate. Sadly, we are given no detailed background about “The Architects,” a disappointing omission considering that the ability to control a planetary climate makes these “Architects” a pretty big deal. Regardless, long ago the orbs were lost in a war, and while the Rain and Breeze Globes were recovered, the Solstice Globe remained missing. Until, that is, it was discovered in the treasure vault on Hynestia by Rinnetta and her Lynnian mentor, Zel Gris.

With the Solstice Globe safely in the cargo hold of the Millennium Falcon, the story takes us from Hynestia, on the edge of Wild Space, to Neral’s moon in the Corellian system. There, Lando will find himself in dire straits thanks to his (surprise!) penchant for being a swindler who skips out on debts. Luckily, Rinetta’s unexpected presence on the Falcon will end up proving beneficial to Lando as she helps him escape from thugs and bounty hunters. And, after he is imprisoned back on Hynestia – the Queen and her royal guard track the Falcon to Neral’s moon – Rinnetta will free the scoundrel from the dungeon, making him promise to bring the Solstice Globe to Livno III for her help. Lando, we find out, takes promises very seriously and, once given, must see it through to the end (a good lesson for young readers).

While I dare not spoil the entire plot, I will note that Justina Ireland crafted an easy-to-follow tale for young readers. While there are certainly moments throughout where an older reader (translation: me) may question the way things unfold, this never really detracts from the overall narrative or enjoyment of the story. Moreover, for a Star Wars fan who is paying extra close attention they will discover that Lando’s Luck addresses a Star Wars concept that tends to be overlooked: the passage of time while in hyperspace. Essentially, Lando’s Luck acknowledges that hyperspace travel takes time, especially when venturing long distances. Consider the following quote towards the end of the book: “They spent a couple of days on the Millennium Falcon. The trip through hyperspace was a long one…” (pg. 147). While many Star Wars tales – books, comics, tv shows, movies, etc. – overlook or outright ignore this fact about hyperspace travel, it was nice to come across a handful of references, like the one above, acknowledging this reality. 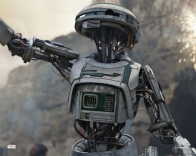 Finally, what can be said about Lando and his droid – sorry, his first mate – L3-37? I genuinely enjoyed how Ireland presents them, capturing their individual voices and motives with care so they feel like the characters in Solo: A Star Wars Story. This is easily done with Lando as he is hellbent on 1) making money and 2) maintaining his own image. But it is doubly true for Elthree who, time and again, reminds us that she is an equal to Lando and other humans (and aliens). She is rightfully furious when a restraining bolt is attached to her and, given her belief in the rights of droids, chastises Princess Rinetta for the suggestion that a sentry droid could be used for her own spare parts. In short, I loved that when  L3-37 would speak I could “hear” actress Phoebe Waller-Bridge in my head.

Overall, I really enjoyed Lando’s Luck and I am glad I picked it up when I found it at Barnes & Noble. I not only recommend it for young readers who will identify with Princess Rinetta but likewise encourage older Star Wars fans to give it a read when they have time to check it out.