“My wife and I will take the girl. We’ve always talked of adopting a baby girl. She will be loved with us.” – Bail Organa

In the first part of this two part analysis, I examined the continuity issue between Return of the Jedi, where Leia describes her mother to Luke, and Revenge of the Sith, which shows the death of Leia’s mother when Leia and her brother are only minutes old. I will spare you a full rehashing of the first piece as you can go read it yourself, but I should note that, to date, no fix has come down from the people at Lucasfilm to settle this issue. Given the new commitment to continuity and canon in the form of a Lucasfilm (Star Wars) Story Group, which oversees all aspects of continuity in the Star Wars universe, I feel it is necessary for continuity issues like this be patched up for the sake of minimizing confusion.

That being said, the question then is how can this particular continuity error be fixed? I noted a few solutions in the previous post, but also explained why these knee-jerk fixes would not adequately hold up. For this second piece, then, I want to present a possible solution that I think could work based off of how I personally interpret the scene in Return of the Jedi. Of course, I will hardly suggest that this solution will make everyone happy. Instead, I hope that by presenting it, and those of you who add to it or provide your own solutions in the comment section, will inspire the Story Group to act in the future to reconcile this confusion.

So, without further ado, here is what I propose…

Bail Organa has deceived his adopted daughter for her own safety.

I am led to believe that the woman whom Leia is describing to Luke in Return of the Jedi is a real person Leia actually knew in the flesh. To me, this makes sense given the intimacy of the scene and what Luke is asking of Leia, wanting to know something about the mother they share but whom he never knew. However, if she is describing a real person, then the question becomes who exactly is this woman she is describing? I will come back to this in a moment, but first, let’s talk Revenge of the Sith for a second.

After Luke and Leia are born, and once Padmé dies, Obi-Wan, Yoda, and Bail Organa make the decision to split up the twins lest the new Emperor discover them. Ultimately, the danger the twins faced was too great to keep them together. 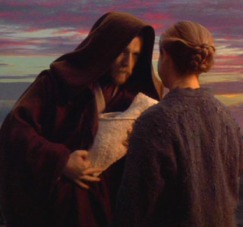 Luke was taken to Tatooine by Obi-Wan to live with Uncle Owen and Aunt Beru, and Kenobi stays to keep a watchful but distant eye on the boy. In turn, Bail Organa agrees to adopt Leia, noting that he and his wife had considered adopting a baby girl. In one of the final scenes of Revenge of the Sith, the viewer sees Leia being presented to the Bail’s wife Breha, the Queen of Alderaan, who holds the child and then the scene ends. But it is what happens immediately after this scene ends where the lie to protect Leia is instituted.

Immediately after the scene cuts out, an unknown woman enters, walks up to Bail and Breha, and the child is handed to her. This woman is a close and loyal confidant of House Organa, and she will raise the baby for only a short time, until Leia is old enough to form an image of this woman in her mind as her “real mother.” This is precisely what Bail wants and expects to happen, that Leia will believe this woman is her mother. When Leia is still very young, a situation will arise that causes this woman to leave Leia. Perhaps, fully committed to the deception, this woman actually does die. This would line up with what Leia says to Luke. Or, perhaps the woman’s death is a ruse, and instead, the woman goes into exile, far away, into the Outer Rim or even into Wild Space, living in solitude where Leia will never find her or encounter her again. If Obi-Wan Kenobi can hide from Darth Vader, surely this woman can hide from her pretend daughter.

With the woman’s “death,” Bail and Breha Organa step back into the picture, officially adopting the young, orphaned Leia as their own. She will be raised and loved as though she were their daughter. As she grows, the memory of the other woman in will begin to fade, and she will only recall images and feelings. Leia will see herself first and foremost as an Organa, as the Crown Princess of Alderaan, the child of Bail and Breha Organa. Yet, Leia will still know that she was adopted, and that she only knew for a short time was her “real mother,” as she would have no other reason to believe otherwise. Perhaps, even Bail and Breha reinforce this from time to time, speaking about her “real mother,” describing her to the child.

But why is this even necessary, why the lie in the first place? Precisely because Leia is in danger from the moment she is born.

Darth Sidious and Darth Vader would know that Kenobi left Mustafar with Padmé. What they would not know, though, is that Kenobi, Yoda, and Bail Organa were present when Luke AND Leia are born. Recall that the Sith Lords knew Padmé was pregnant, but they did not know that Padmé was pregnant with twins.[i] After the children are born, in order to protect them, the two Jedi and the Alderaanian Senator decide how best to protect each child. What is presented at the end of Revenge of the Sith, then, is an elaborate series of deceptions in order to throw Sidious and Vader off the trail. Whereas Luke is hidden remotely on Tatooine in the Outer Rim far from Coruscant, Leia is essentially hidden in plain view on Alderaan and will become not only the Crown Princess of House Organa but Alderaan’s Senator. What I am suggesting, then, is simply one more layer to the deception, one that Bail Organa concocted as a fail-safe, one that protects Leia even from herself.

Put yourself into Bail Organa’s mind for a second as he traveled with the child back to Alderaan after Padmé’s death. Knowing that he would have to tell the child one day about her mother, Bail knew he could never tell her about Padmé Amidala. If he was to do so, and Leia slipped up and spoke about Padmé publically as her mother, the result could be devastating…Vader could find out. Yet, Bail would also know that he had to ensure no questions would be asked about the child who is suddenly in his care. Remember that Bail was present at the Jedi Temple when the Jedi Purge began, and was also a close confidant of Padmé’s in the Senate. Certainly, the new Empire would be watching him closely and may inquire about the identity of his new daughter who just happened to appear right after the late-Senator Amidala was laid to rest.

To throw them off the trail, then, Bail had to create the ruse to ensure that Leia would never speak of Padmé publicly, and to guarantee that the Empire would not discover Leia’s true origins. This was why the woman was necessary, to act as a temporary buffer against watching eyes, and as a long-term deception to ensure Leia would never be questioned about her ACTUAL mother. In short, what Leia never knew could never hurt her.

Furthermore, in the second issue of the Princess Leia comic series, Leia arrives on the planet Naboo only days after the destruction of the First Death Star. There, in the streets of the capital city of Theed, she comes across a portrait of Queen Amidala. Viewing the mural, she is taken aback when she thinks the woman in the mural turns and looks at her, though she dismisses this and continues her journey through the city. Leia is completely unaware who this royal figure is/was, none-the-wiser that she was standing in front of a portrait of her ACTUAL mother. Then again, there is also nothing to indicate in this second issue that Leia even knows that her real mother was from the planet Naboo. Why would she? Leia believed her real mother was a beautiful and kind Alderaanian, and that she died when Leia was very young.

As modern-day myth, Star Wars lends itself to different experiences and interpretations, and that is why I love it. When I watch the movies, read the books or comics, sit down to watch The Clone Wars or Rebels, and play the video games, I engage IN and WITH the myth-making. The way I experience and interpret Star Wars is meaningful to me in a way that, at times, may line up with the way others interpret it and, at other times, will be entirely my own and fundamentally different than others. So, while my experience leads me to believe Leia was discussing a real woman she was led to believe was her real mother for her safety, others might see something different. As one person noted in a comment on the previous post, perhaps Leia had a connection through the Force with her mother, and she is describing the impression of Padmé that was left there by the Force.[ii] Either way, it is a matter of how one wishes to experience and interpret the scene, and since the Story Group has not provided a definitive fix in the new and official canon, one can believe what they wish: that Leia is describing a flesh/blood woman she thought was her “real mother” OR someone she feels connected to through the Force.

One way or another, though, I hope we can all agree that it would be great to see this continuity error get a fix and, while they are at it, maybe we could also get to experience a story in which Luke and Leia finally learn more about Padmé Amidala, their real and actual mother.

[i] Remember how Vader taunts Luke on the Second Death Star: “So, you have a twin sista…your thoughts betray her, too.” This is the moment Vader realizes he has a daughter.

[ii] Go check out the comment thread from Part I. Lots of great thoughts and ideas!