In the novelization of The Empire Strikes Back, author Donald F. Glut offers a paragraph detailing the bounty hunters Darth Vader assembles to hunt down the Millennium Falcon. Bossk, Zuckuss, Dengar, IG-88, and Boba Fett, each are named and briefly described, with Fett receiving the lions share of the attention. But what really stands out in the description of these “amoral money-grubbers” is that 4-LOM, the bounty hunting protocol droid, is not mentioned. Even though 4-LOM appears in The Empire Strikes Back alongside the other hunters named above, the droid was, for some reason, left out of the novelization.

The absence of 4-LOM from the book is certainly odd but luckily the bounty hunter has received other opportunities to shine, particularly in the Expanded Universe. But rather than list all of those stories, or try to paint some all-encompassing picture of the protocol droid’s endeavors, I thought I would highlight one tale from the Expanded Universe that I have always enjoyed, a tale that is specifically about 4-LOM and his partnership with the Gand bounty hunter Zuckuss. 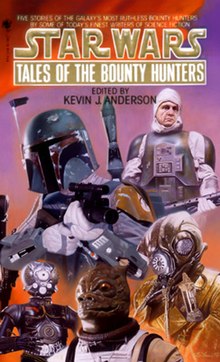 The cover of Tales of the Bounty Hunters. 4-LOM is in the bottom left-hand corner.
Photo Credit – Random House

“Of Possible Futures: The Tale of Zuckuss and 4-LOM” can be found in Tales of the Bounty Hunters, an anthology offering short stories about the six fortune seekers from The Empire Strikes Back. Written by M. Shayne Bell, “Of Possible Futures” takes place during and immediately after the events of The Empire Strikes Back. It depicts 4-LOM and Zuckuss traveling to meet with Darth Vader and subsequently determining how they will go about capturing Han Solo and the crew of the Millennium Falcon.

Now, I do not want to spend the rest of this post detailing everything that happens in the short story, as I would rather encourage you to go (re)read it for yourself. The entire narrative seamlessly fits into the larger context of the film, and even adds a bonus storyline about Toryn Farr (she is the woman from the film who says “Stand by Ion Control…Fire”). But while I absolutely love how the plot unfolds, and the fact that 4-LOM and Zuckuss each receive extended backstories, what I find truly fascinating about the tale is that 4-LOM spends a large chunk of the story attempting to gain intuition.

As a droid, 4-LOM is governed by logic, rationalizing actions and outcomes based on the processes running on his operating system. With his reasoning skills leading him from serving others to the life of a bounty hunter, which his backstory details, we come to learn early in the tale that 4-LOM is studying his partner Zuckuss to discover how to become intuitive. With his Gand partner spending countless hours meditating, “feeling” his way to knowledge, 4-LOM observes, collects and analyzes the raw data to discern how to unlock a process that is beyond reason.

Does this work? Is 4-LOM able to accomplish his goal of gaining intuition? Well, like I said, you will have to (re)read “Of Possible Futures” to find out. Or, perhaps you will just have to wait for me to write a post about “The Tale of Zuckuss and 4-LOM,” something I am considering because it really is a good story with a lot to explore. Instead of telling you what happens, whether 4-LOM figures out how to be intuitive like his partner, I will instead close this piece by offering you these four random facts about the bounty hunting protocol droid: