When George Lucas released the Star Wars Prequel Trilogy, it created a bit of a conundrum: what viewing order should a Star Wars fan use when introducing the films to someone who has never watched Star Wars? On the one hand, the films could be shown to a newbie in “Release Order” with the Original Trilogy first and the Prequels second. On the other hand, the movies could be shown in “Chronological Order” beginning with Episode I (The Phantom Menace) and ending with Episode VI (Return of the Jedi)? Plus, while the “Release Order” and “Chronological Order” are the most obvious options, there are a number of other viewing orders that have been suggested (“Machete Order” being the most popular).

Ignoring, for the moment, that there now exists a Sequel Trilogy, stand-alone films, and television shows (not to mention novels, comics, games, and more), I have always felt that Star Wars should be introduced to a newcomer in “Release Order” and not “Chronological Order.” This belief is entirely predicated on my own interactions with Star Wars from youth to adulthood. I watched the Original Trilogy when I was a kid, and the Prequel Trilogy as a teen/young adult. But, that fact also makes me biased, and my suggestion to someone to start with A New Hope, while grounded in the fact that it was the first Star Wars film, is also grounded in my personal journey with Star Wars. Someone can have entirely different reasons for suggesting the “Release Order” or “Chronological Order” to a newcomer and that is perfectly fine by me.

Actually, as a life-long Star Wars fan my only real responsibility is to offer suggestions, not to implement rules, and that goes far beyond the confines of the “Release Order” vs “Chronological Order” debate. Since A New Hope came out in 1977 (I was negative eight years old at the time), Star Wars has become a multi-headed beast, a hydra masquerading as an epic space fantasy. Which is to say this: Star Wars has so many stories across so many mediums that the whole “Release Order” or “Chronological Order” conundrum seems rather small. The films might be the natural starting point for most Star Wars fans – there are certainly those who have come to the franchise by another route – but the question of “where do I go from here?” is a far more difficult question I have been asked by a lot of people who are curious about exploring the depths of the Star Wars franchise after they have watched one or more of the films. 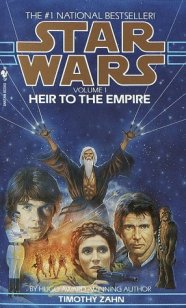 “Heir to the Empire”, the first novel in The Thrawn Trilogy. Photo Credit – Bantam Spectra

Like the first world problem of cinematic watch order, I only have suggestions and no definitive answers for people who are eager to be introduced to Star Wars beyond the films. Naturally, I am predisposed to reduce my answer to the least common denominator – my own personal preferences. Shocking! Here is an example: I am a huge fan of The Thrawn Trilogy by author Timothy Zahn, and absolutely love the Imperial Grand Admiral Thrawn who was introduced in the series. But just because I am a fan of Thrawn doesn’t mean anyone I encourage to read the trilogy will inevitably love it. Then again, perhaps they will enjoy it but for completely different reasons than I do. But isn’t that just the bare bones truth of Star Wars anyway, everyone loving certain aspects of the franchise motivated entirely by their personal tastes? Don’t answer that, it’s a rhetorical question.

So, where do we go from here? Oish, I have no idea. Like I said with my neat “Star Wars is a hydra” metaphor, the franchise is just too big at this point to really offer one direction, one way of “doing” Star Wars. I am going to punt on offering some really profound “Introductory” approach to Star Wars. Instead, I will just offer this all-encompassing suggestion for people who are interested in exploring Star Wars:

Start with A New Hope – it was the first Star Wars film after all so it just feels right to start there – and then just make it up as you go. Actually, just treat Star Wars like a big and exciting choose your own adventure, and no matter what you choose, you are doing Star Wars right. And, if you get confused along the way, or want more personalized suggestions, feel free to message me (I have a contact page). I am happy to offer my thoughts. Just, ya know, don’t be surprised when I start talking about Thrawn.