When we first watched The Phantom Menace and witnessed Darth Maul being sliced in half by Obi-Wan Kenobi, it was safe to assume that the young Dark Lord had been killed. Yet, as we discovered in The Clone Wars animated series, Maul miraculously survived his horrific bifurcation. Confiding in his training and anger, Maul drew upon the Dark Side of the Force to preserve what remained of him. Though his injuries took a physical and mental toll on him, he was able to cling to life and eventually found himself on the junk world of Lotho Minor. It was on the trash-filled planet where his brother, Savage Oppress, would re-discover Darth Maul. Taking the disheveled and mentally unstable Zabrak with him, Oppress returned Maul to Mother Talzin, a Dathomiri Witch who is, we discover much later, Maul’s mother. In turn, using her dark magic, Mother Talzin restored the one-time Dark Lord to his terrifying form, healing his mental anguish and providing him with new, mechanical legs.

Darth Maul’s return in The Clone Wars opened up a rich avenue of story-telling that has since extended into comic-book form (Darth Maul: Son of Dathomir), another animated series (Star Wars Rebels), and a new novel (Ahsoka). But his return also created intriguing ways of thinking about some of the lore and themes in Star Wars. For example, in a previous post from many moons ago – The Last Sith Lord – I speculated on the possibility that it is Maul, and not Vader or Sidious, who is the very last Dark Lord of the Sith (you can read that piece to see what I had to say). And in this post, I wanted to do something similar, this time considering how Maul’s re-emergence in The Clone Wars forces us to think more deeply about the concept of “cheating death,” a critical theme in Revenge of the Sith and the Prequel Trilogy.

For me, one of the most fascinating bits of lore added in Revenge of the Sith is the Tale of Darth Plagueis the Wise. Recounting the tale to Anakin Skywalker, Chancellor Palpatine (aka Darth Sidious) explains that,”Darth Plagueis was a Dark Lord of the Sith so powerful and so wise, he could use the Force to influence the midi-chlorians to create life. He had such a knowledge of the dark side, he could even keep the ones he cared about from dying.” Of course, Palpatine also points out that Plagueis’ apprentice (surprise, it was Sidious!) killed the powerful Sith Lord in his sleep, noting the irony that “He could save others from death, but not himself.” 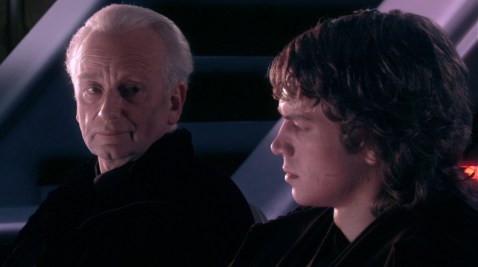 With the Tale planted in Skywalker’s mind, it is little surprise that later in the film, when Anakin pledges himself to the teachings of Darth Sidious, he begs the Dark Lord of the Sith to help him save Padmé’s life. One will recall that young Skywalker was having premonitions about his wife’s impending death, visions of her suffering as she dies in child birth. And, in response to Anakin’s plea, Sidious remarks that “To cheat death is a power only one has achieved, but, if we work together, I know we can discover the secret.”

Now, it’s obvious that Sidious’ statement – “to cheat death is a power only one has achieved” –  is a reference to Darth Plagueis. However, it’s also true that Darth Maul was able to cheat death. Plagueis could keep others from dying, Maul was able to keep himself from dying. This being the case, it begs the question: is it possible to reinterpret Sidious’ statement to suggest he was talking about Darth Maul and not Darth Plagueis?

This question has rattled around in my brain for some time, although truthfully it is a difficult one to answer in the affirmative. Sidious’ intention when he says this line is pretty straight-forward: to manipulate Anakin into accepting Sidious as his new Master. Since Sidious seems interested in helping Anakin discover the power to cheat death – all for the sake of saving Padmé – it makes sense that young Skywalker would pledge himself to the Dark Lord. Along these lines, it is also worth remembering that after Anakin lost his mother in Attack of the Clones, he vehemently declares that he will become so powerful he will “learn how to stop people from dying.” Given Skywalker’s intense desire to keep his loved ones from death, it is no wonder that 1) Palpatine told Anakin the Tale of Darth Plagueis and; 2) that he offered to help the young man discover the secret to cheating death.

None of this is to suggest, of course, that Darth Sidious and Anakin were ignorant that Darth Maul cheated death; both are well-aware the Sith survived his injuries and is still very much alive. But due to the context of this scene – embedded, as it is, in the Revenge of the Sith and the Prequel Trilogy – I find it unlikely that Sidious was referring to Darth Maul and not Darth Plagueis. Because Skywalker’s motivation is to save others from death – a power he was told Plagueis possessed – there is really no reason to imagine Darth Maul is at the forefront of his mind (or Sidious’) in the scene.

Nevertheless, I am still open to and intrigued by the possibility that Sidious was thinking of/referring to Darth Maul when he says “to cheat death is a power only one has achieved.” But I am not going to force the issue, in part because I have a lot of other things to say about cheating death and will be doing more posts on the topic. If, someday, a light turns on in my head and I figure out a way to make it work then I will be sure to share it with y’all. Otherwise, perhaps one of you will find a way to work it out in the meantime.

More posts on the topic of cheating death: