In my last post – The Force Awakens Without Lando – I noted my disappointment that Lando Calrissian did not make an appearance in The Force Awakens while the other main characters from the Original Trilogy were included. I’m not going to rehash that entire post here, but I would encourage you to check it out if you haven’t done so. I will point out that in the post I acknowledged that The Force Awakens was a good movie even though Calrissian was missing from it. And besides, I am hopeful that he will be appearing in Episode VIII and/or IX.

So why, might one ask, am I discussing Lando once again? Is there more to be said about his absence from The Force Awakens? No, not really. Instead, I wanted to extend the conversation on Lando by turning to the 30-year period of time between Return of the Jedi and The Force Awakens. So far, only a handful of stories have taken shape (across various mediums) which have begun to populate this New Republic/Rise of the First Order era. And yet, of those stories that have begun popping up, two characters in particular have been noticeably absent from this era: Luke Skywalker and (you guessed it) Lando Calrissian.

A while back, a guest post from Michael Miller considered Luke’s absence from this era of stories, and I definitely think you should check out what Michael had to say. In the meantime, I’ll cut right to the chase: I find it incredibly odd and definitely confusing that Lando has been such an incredibly minor – and at times blatantly absent – character in the this particular era of the Star Wars timeline. Now, I say this with the full awareness that Lando has popped up in a few post-Endor stories (I’ll come back to these momentarily). Plus, it’s important to note that Lando has been given a great(er) deal of attention in stories that take place before Return of the Jedi. Notably, in the show Star Wars Rebels, Calrissian has made a couple of fun cameos and Lando was the main character in a five-part Marvel comic series aptly named Lando. In fact, I would be remiss if I failed to mention that the Lando series was one of my favorite story-arcs added to the Disney canon, perfectly capturing Lando’s personality, vocabulary, demeanor, and overall style.

Yet, even though Lando is the star of his own comic series and has a spattering of appearances on Rebels, I am left to wonder why he is not a more noticeable and active presence in the stories unfolding in the weeks/months/years following the Battle of Endor. Like I said, he has shown up here and there, but these moments are few in number and relatively shallow.

For example, in Claudia Gray’s novel Bloodline, set 24 years after the events of Return of the Jedi, Lando sends a message of support to Leia as she deals with the fallout of the Galactic Senate learning that she is the daughter of Darth Vader. A kind gesture on Lando’s part, to be sure, but nothing he actually says in the message is detailed, nor does he factor into the novel in any other way.

In the four-part Shattered Empire comic series, set in immediate aftermath of the Battle of Endor, Lando actually appears in Issue #001 and #003. In Issue #001, Lando participates in the battle (flying the Millennium Falcon) and is present for the celebration which immediately follows the Rebel victory, chatting it up with Han Solo and other soldiers. Nothing new or surprising there. On the other hand, in Issue #003, Calrissian leads a New Republic into the Battle over Naboo, stopping the Empire’s operation to destroy the planet. Pretty awesome, I have to admit. Besides, it makes perfect sense that in the days, weeks and months after the victory at Endor, Lando would continue to serve as General in the Rebellion-turned-New Republic. However, his very next chronological appearance on the Star Wars timeline makes a lot less sense… 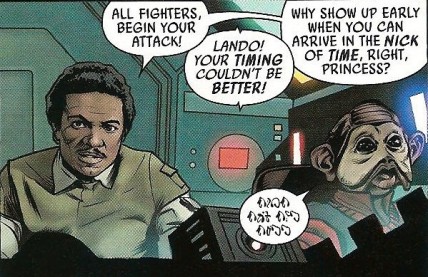 In July 2016, Lando was part of an update to the game Star Wars: Uprising. While I eagerly welcomed his addition to the game, hoping that his arrival would add a dynamic new layer to the game plot/story, my enthusiasm quickly turned to utter confusion and disappointment. Allow me to explain. When one initially meets with Lando in the Longstar Marketplace on the planet Burnin Konn, Lando lays out his profitable reasons for sneaking into the Anoat sector (which serves as the location for the game and is under Imperial blockade) and is willing to cut you in on the deal. In turn, Lando gives you a job to raid the Imperial base on Nar Hypa, a moon orbiting the planet Mataou, a mission which yields some basic materials, credits, and trophies (which can be used to purchase other goods). Excited to discover what would come after my first “Lando Job,” I quickly became discouraged when I realized Lando was not going to immediately send me on another run. Surely, I figured, if I waited a day a new mission would be ready for me…and I was right! Logging into the game a day later, I was greeted by an in-game message that “Lando has a job for you.” I eagerly scooted over to the Longstar Marketplace, sought out Lando, and was presented with the EXACT SAME MISSION! The same map, Imperial forces spread out in the same places, and a similar payout. Since Lando was introduced into Uprising, his “jobs” are always the same. And, to make things even more ridiculous, Lando just keeps standing around the Longstar Marketplace. One would presume that at some point he’d make his way to the Carbon Score Cantina…

Now, unless one counts some credits and a handful of in-game material as meaningful, Lando’s presence in Uprising is, to put it bluntly, entirely pointless. That is, it is pointless as of right now. While Lando’s inclusion in Uprising currently lacks any significant purpose, I am hoping that his role in the game will be expanded, especially considering the game is set in the days/weeks/months following the Battle of Endor. In short, since a (former?) Rebel/New Republic General was able to infiltrate the Imperial blockade of the Anoat sector, making his way to Burnin Konn, one would think (and hope!) that he would have plans to provide aid to the forces fighting Imperial oppression in the sector. Of course, Lando might also end up indefinitely loitering in Longstar Marketplace, his presence having no outward effect on the overall goal of breaking the Empire’s blockade and freeing the sector. Honestly, at this point, who knows what will happen with Lando in the Anoat sector.

Then again, who knows when or how Lando will show up again in a post-Endor story. I’ll be sure to update this post the next time he does.

Addition: On September 22, 2016, the game developers of Star Wars: Uprising announced that Uprising will permanently shut down in November 2016. As someone who consistently played the game since it came out, I am naturally disappointed although not surprised. The game failed to live up to a number of expectations, and while I enjoyed the lore which it added to the rich Star Wars canon, game play consistently fell short, particularly given its repetitive nature which I detailed (in part) with the “Lando Missions.”

In light of this development, I am left wondering what this will mean for Lando Calrissian, Perhaps, even though Uprising is shutting down, a novel or comic will be written that completes the game’s primary story – the liberation of the Anoat sector – with Lando taking on a larger, more central role. Or, perhaps he will simply be stuck in limbo, continuing to stand around the Longstar Marketplace on Burnin Konn while the New Republic defeats the remnants of the Empire at Jakku. I suppose only time – and more stories – will tell what Lando’s role will end up being.