This is the first of MANY pieces I have coming on The Force Awakens. Those other posts will start digging into the content of the film, but for now, I wanted to think about The Force Awakens in relation to the Star Wars canon in general, and the other six live-action films specifically.

Almost immediately after seeing The Force Awakens, one of the first questions I was asked about the film had nothing to do with anything that happens in it. Oh no, the question I got was very specific and not at all surprising – where would I rank The Force Awakens in relation to the other Star Wars films. Frankly, the question left me a little dumbfounded.  I was, at this point, less than 12 hours removed from seeing the movie for the first time and had not fully digested what I had watched. I might be a die-hard Star Wars fan but after one viewing of the film there was just no reasonable way for me to rank The Force Awakens with the other films. So, I politely deflected the question and didn’t answer it. 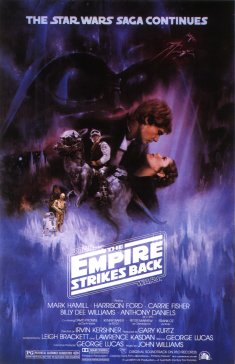 Yet, the question won’t leave me alone. It has popped up in a few other conversations I’ve had about The Force Awakens and I have seen some people post their own updated rankings of the Star Wars films on Facebook,  Twitter, in articles,  etc. Now, to be fair, none of this is surprising. Since a new movie has been added to the list of Star Wars films, it was only a matter of time before conversations started circulating about where The Force Awakens should be ranked in that list. I just didn’t anticipate getting the question immediately after seeing it for the first time, though the person who asked it certainly meant well (as do those who continue asking me).

Here’s the funny thing, though – I don’t have a rank list of the Star Wars films. While The Empire Strikes Back has always been my favorite, I have never taken the time to analyze the others and come up with some definitive list for second, third, fourth, etc. In fact, while “Empire” is my favorite, it’s probably not the one I have even watched the most. I have seen all six films so many times that I have lost count, so I really just don’t know which one tops the viewing chart. Then again, that doesn’t matter. At this point, all six are so engrained in my brain that they are, quite frankly, part of who I am, part of my self-identity.

But the more I have thought about ranking the films, the more various angles and questions began popping into my brain.

Ahsoka Tano sits and talks with her Master, Anakin Skywalker, after the Battle of Christophsis.
Photo Credit – Star Wars: The Clone Wars (movie)

For starters, when I see fans ranking the films, I can’t help but ask: why aren’t they including The Clone Wars movie? Sure, it isn’t a live-action  film, but it did premier in theaters in 2008. Plus, it  introduced Star Wars fans to Ahsoka Tano, THE most popular character in the Star Wars canon who has never appeared in live-action form. All I’m saying is that if one is going to rank Star Wars films, don’t leave this one off the list just because it’s animated.

In turn, this opens the door to a larger question: why not just rank The Force Awakens with ALL of the Star Wars canon? I’m talking movies, books, comics, video games, etc. Since the Expanded Universe was disbanded by Disney/Lucasfilm, everything going forward is on equal footing as being canonical and relevant. So I have to ask: Is The Force Awakens better than Christie Golden’s novel Dark Disciple, Claudia Gray’s young adult novel Lost Stars, or the Shattered Empire comic series? Perhaps one would rank Ryder Wyndham’s junior novel, Ezra’s Gamble, above The Force Awakens but below the Season 3 episode of The Clone Wars entitled  “Witches of the Mist.” Or maybe someone enjoys The Force Awakens Visual Dictionary MORE than the movie itself and have decided to place it above the film in their list. That might seem counterintuitive to some but to that particular person the decision would make perfect sense.

Realistically, of course, it is difficult to rank the entire Star Wars canon, even for someone like me who is, more often than not, submerged in the Star Wars universe in some way, shape, or form. While everything added to the canon has equal authority, how does one even begin to compare junior novels to the films, or comics to video  games, and so on? There are certainly some stories that I have enjoyed more than others, and there are others that I am more critical of, feeling they fall flat for various reasons. And even if I were to rank the entire canon what would that accomplish? My canonical ranking would look different than someone else’s ranking, and I really have no interest in sitting here trying to argue that mine is the right one. 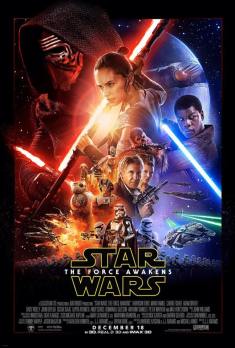 But like I said, the vast majority of people aren’t like me or other die-hard Star Wars fans. For the average moviegoer, The Force Awaken is the newest installment of Star Wars, period. My uncle, for example, has seen all six previous live-action films in the theater, but he certainly didn’t go and see The Clone Wars movie, nor does he read any of the books, comics, etc. AND this takes me back to what I said earlier: I’m not surprised that The Force Awakens is being compared to/ranked with the other live-action Star Wars films. Most people only have the original six films as their points of reference, so I can’t really expect them to include The Clone Wars movie (among other things) in their rank  list.

So, seeing as I’m back where I started,  where do I go from here? Well, the original question is still relevant: where should one rank The Force Awakens in relation to the other six live-action films? I already noted that I don’t have my own rank list and I’m not interested in starting one. However, if you’re planning on creating/updating a rank list, or have already done so, I would suggest you take the following question into consideration:

Is it fair to place The Force Awakens (or Rogue One) higher in a rank list than any of the original Star Wars films?

Now, I am purposefully using the word “original” here to refer to both trilogies for a very specific reason: Episodes I-VI are the films that Star Wars creator George Lucas wrote, the comprehensive story he wanted to tell. Those six films are, in every sense of the word, the original Star Wars stories. So, we can reframe the above question in a different way, coming at it from a slightly different angle: Can a new  Star Wars movie like “The Force Awakens” (or Rogue One), a movie NOT written by George Lucas, be a better Star Wars story than Lucas told in the original films?

Don’t presume, though, that I’m suggesting The Force Awakens is not worthy of carrying the banner of Star Wars. On the contrary, I personally enjoyed the film and believe it’s as much a part of Star Wars as Revenge of the Sith, A New Hope, Attack of the Clones, etc. Rather, what I’m asking is whether its possible that The Force Awakens – or Rogue One – is, a more compelling, a more complete, an all-around better Star Wars story than anything Lucas gave us?

Really, I can’t decide this for you. Whether you’re a “rank list” kind of person or not, you’ll just have to figure it out and articulate the answer for yourself.