One of the last battles of the Clone Wars, the Separatist invasion of Kashyyk in Revenge of the Sith provides a glimpse of not just the Wookie homeworld, but Wookie warriors charging into battle alongside the Clones and Jedi. Of course, it also gave us a little nugget of insight into Chewbacca’s backstory, namely that he participated in the fight against the droids. Granted, Chewie’s cameo in Revenge of the Sith is fairly short and we never actually see him fight the battle droids. I was always a bit disappointed about that because, let’s be honest, it would have been pretty sweet to see our favorite Wookie blasting some battle droids.

Although we don’t get to see him kick some droid ass, Chewbacca’s cameo is hardly unimportant or without purpose. He and another Wookie, Tarfful, are present with Yoda when Clone Commander Gree and another Clone turn on the Jedi Master. When Gree and his counterpart walk up behind Yoda, leveling their weapons at the small Jedi, the Wookies witness Yoda leap up and decapitate the two Clones. In turn, Chewbacca and Tarfful usher Yoda away to safety, aware that the elder Jedi is in danger. And as Yoda is about to leave Kashyyyk, he thanks Tarfful and Chewbacca by name. With that, Yoda blasts off towards space as the two Wookies look on.

Now, before I go any further, let me just say that I really like Chewbacca showing up in Revenge of the Sith. In fact, it probably would have been really odd for there to be a plot involving Kashyyyk/Wookies and Chewbacca not being there. But Chewie making a cameo, while awesome in and of itself, is not the only reason I like that he is there. I like that his appearance, specifically his proximity and interactions with Yoda, create a new way of thinking about his encounter with Obi-Wan and Luke in A New Hope. Essentially, the question becomes: did he say anything to Obi-Wan and/or Luke about the Jedi Master he helped save 19 years before??? 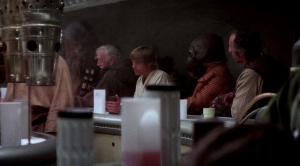 Well, to be honest, we can actually rule out Luke from the get go. When Force ghost Obi-Wan appears to Luke in The Empire Strikes Back and tells Skywalker to “go to the Dagobah system” to learn from Yoda, Luke clearly has no idea who Kenobi is talking about. I would argue that any conversation Chewbacca and Luke have about the Jedi in the new canon material that takes place between A New Hope and The Empire Strikes Back should NOT include any information about Yoda. Essentially, I believe it is important to maintain Luke’s ignorance so as to safeguard the appearance and directive from Kenobi in “Empire.” And after the events of “Empire,” if Chewie and Luke want to sit down and talk about Yoda, or the Jedi Order, or whatever, then I say more power to them.

But the interaction(s) between Obi-Wan and Chewbacca in A New Hope, that is a different story. Recall that it’s a conversation between Kenobi and Chewie that initiates the meeting with Han Solo. I can’t imagine Kenobi came right out and told Chewbacca he was a Jedi when they first talk, but I can believe that Chewie, having interacted with Jedi in the past, would have picked up on the fact that this old guy was dressed like a Jedi. Certainly Chewbacca, at 180 years old, can recall how the Jedi used to dress.

But then, right after their initial conversation, two other really important things happen simultaneously. The first, the most obvious, is that Kenobi whips out a lightsaber. Hmmmm, this old guy is dressed like a Jedi and has a lightsaber, innnnnteresting. Plus, and this is the key, Luke, having been pushed to the floor by his assailants, calls out, “Obi-Wan, Obi-Wan!!!”

See, if we go back to Revenge of the Sith, right before the fighting on Kashyyyk commences, Master Yoda is speaking to the entire Jedi Council via hologram about the secret location of the Separatist General Grievous. In turn, the Council decides that Kenobi will lead the attack to capture Grievous. And, who just happens to be standing behind Yoda, intently watching and listening the entire time: CHEWBACCA!!! Here, go see for yourself: Battle of Kashyyyk.

Yoda attends a meeting of the Jedi Council while Chewbacca and Tarfful look on.
Photo Credit – Star Wars Episode III: Revenge of the Sith

Given all the signs (the robe, the lightsaber, the name), not to mention his own previous interactions with Yoda and other Jedi, does Chewie know he is speaking with a Jedi in the Mos Eisley Cantina? Honestly, it is a total toss-up. On the one hand, he very well might have no idea; however, it is also entirely possible that he does know. Heck, even if he doesn’t know it is Kenobi, but knows that he is interacting with a Jedi, that is perfectly fine.  But if he does know he is chatting with a Jedi, then the question is – does he pull the Jedi aside and say anything to him about his previous interactions with Jedi, particularly his safe-guarding of Yoda 19 years earlier?

Short of a story being written that either A) shows the two discussing Yoda/the Jedi Order and/or; B) that alludes to such a conversation taking place (say in Chewie’s inner dialogue in the new Chewbacca comic series), there is really just no way of knowing. And frankly, I am not sure that we even need to know. While on the one hand it is intriguing to imagine the two having a private conversation about the Jedi Order, it is also equally interesting to think that Obi-Wan chatted with Chewbacca and had no idea that he was speaking to a Wookie who (may) know who he is but who, 19 years earlier, helped safe-guard Yoda as the Jedi Master fled Kashyyyk. And, on the flip side, it’s equally intriguing to think that Chewbacca had a hunch about this Obi-Wan character but never said anything.

But perhaps what is even more profound is the fact that Chewbacca, on these two separate occasions, is in the right location to aid a Jedi. He is present when Yoda is in need of protection and, 19 years later, is also present when Obi-Wan is looking for passage to Alderaan. Oh, and I almost forgot to mention, in an episode of The Clone Wars he also provides assistance to padawan Ahsoka Tano and a couple of Jedi younglings who had been captured by Trandoshan hunters. Not once, not twice, but at least three times Chewbacca is there to help the Jedi. Some (ahem, Han) might call it coincidence or just dumb luck, but I call it the will of the Force. On each occasion, Chewbacca is precisely where the Force wanted him to be, ready to assist a Jedi who was in need. Because of this, I really couldn’t care less if Chewie and Obi-Wan chat about their mutual connection(s). The only connection that really matters is the one they have in the Force. Everything else is just secondary.